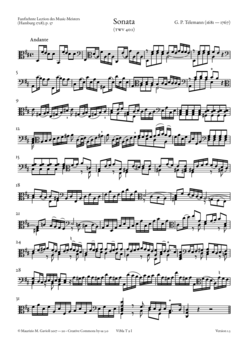 All Telemann works for one or more violas da gamba without continuo (TWV class 40). It only includes works for which the vdg is explicitly stated as an instrument, either as the only possibility or one among several. It does not include works which could be performed on the vdg or have been (or could be) adapted to the vdg..